The Ghost Town of Rodney Mississippi 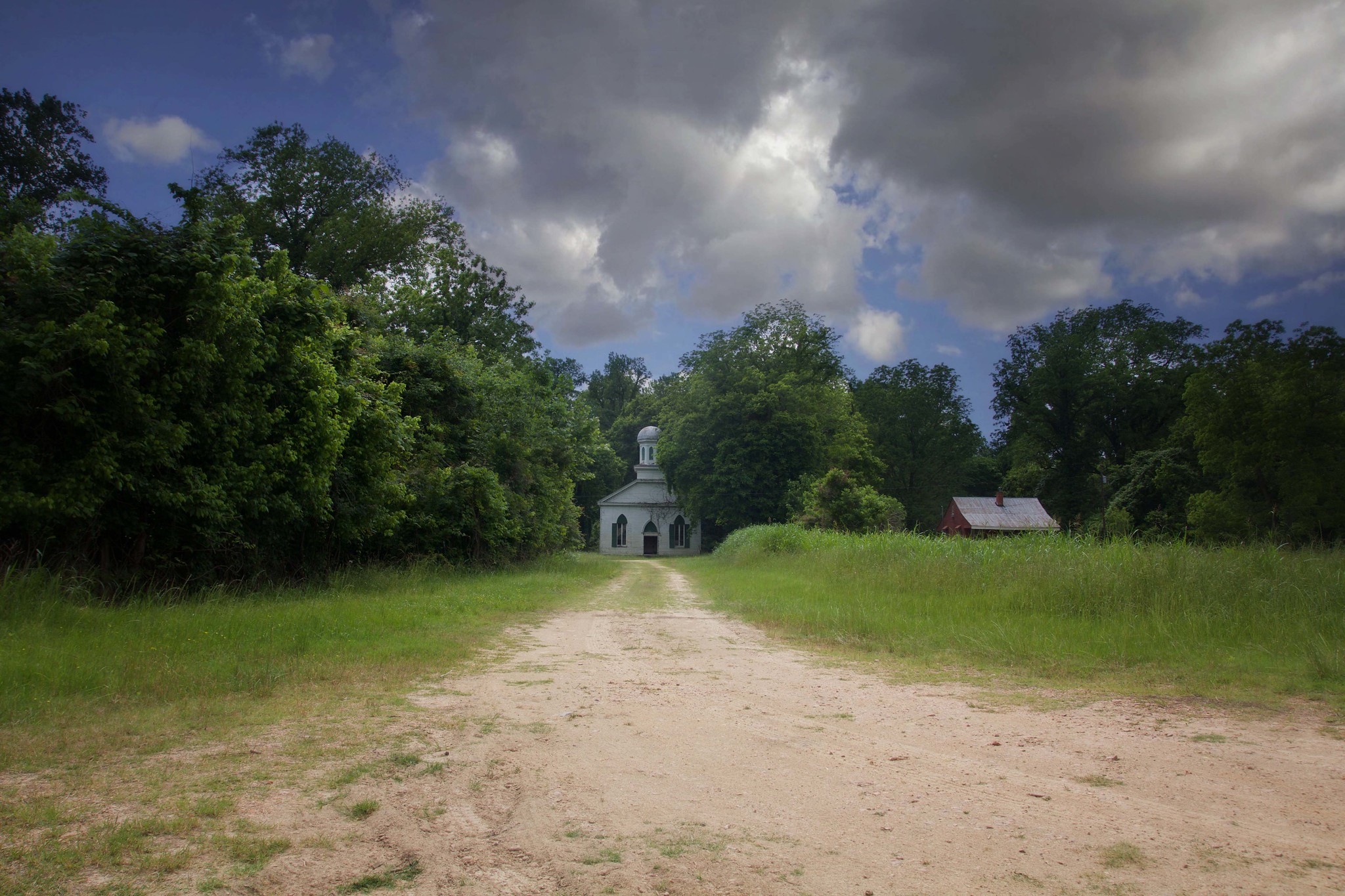 Hollow buildings and lifeless roads are all that remains of the people who were. Imagined echoes of their stories catch the wind from the river bluffs as you soak in the heavy air from the Mighty Mississippi. You, intrepid wanderer, have found yourself at the end of a long and winding road and the reward is a glimpse back in time.

As you round the final bend of the old dirt road, you begin to realize that you’ve finally arrived somewhere- but it’s not like anywhere you’ve ever been before. It is empty, quiet, and seems eerily still for a place that once bustled with life. And while we know that many souls passed down these roads, it’s difficult to imagine that anyone has ever laid their eyes on this isolated place.

But indeed they have. A whole community has come and gone from Rodney, leaving only a scant portion of buildings behind to represent the once-burgeoning town that was here. You might wonder why a whole town would vanish, leaving its buildings behind, but the story is less about an overnight exodus and more about a laundry list of circumstances out of their control that slowly forced the townspeople out over time.

First settled by the European (British, Spanish, and French) in the 1700s (1722 or 1763), the settlement that would become Rodney sat against the Mississippi River. At that point, the location had long-been popular as a Mississippi River crossing for many Native Americans. It was also an early crossing place for travelers along the El Camino Real, the old Spanish “Royal Road.” The French referred to it as Petit Gulf, to distinguish it from the larger port of Grand Gulf. As settlements along the Mississippi grew, so did the importance of the port of Petit Gulf. In 1814 the name of the town was changed to honor Judge Thomas Rodney, the territorial magistrate.

The town would see its highest points during the 1840s and 1850s during the hey-day of steamboats and cotton as it had a strategic placement along the Mississippi River at that time. A community grew around this river stop and by 1860, the town had grown to 4,000 residents. As the shipping business along the Mississippi grew, so did the importance of this settlement- so much so that when the state capital was being chosen, it was almost voted as the state capital, losing by only 3 votes.

The bustling economy of the cotton era made many a rich man and brought many jobs to this area while it lasted. This boom created many jobs along the roads of Rodney in businesses that supported locals and river travelers alike. A cotton gin processed the crops from the expansive fields of the area and prepared these products to move along the river to its next port. building three churches, two banks, 35 stores, a hotel, homes, saloons, and one of Mississippi’s first Opera Houses.

As these people started a new community in previously undeveloped land, I wonder what dreams, and plans, they had for their future in this new place. What their vision was for life there in 10, 20, 50 years?

You don’t build like this if you don’t hope/intend to stay but as the saying goes: ‘The best laid plans of mice and men often go awry’

PROBLEMS ON THE HORIZON FOR RODNEY

Despite their best intentions to make a long-term home here, the settlers of this era were going to be dealt a series of blows that no one could’ve anticipated; fires, the Civil War, and major shifts to the Mississippi River would change life in this rural town forever.

The town, or what’s left of it that you can currently see is NOT original Old Rodney with the exception of Rodney Presbyterian. The church is only remaining building connected to Old first town structures of Rodney. There were three documented fires in Rodney that destroyed the early buildings. The town of Rodney was consumed by fire on at least three documented occasions in 1837, 1852, and in 1869.

Losses according to The Mississippi Free Trader (Natchez, Miss.) May 12, 1837
“The Fire in Rodney – The (Rodney) Telegraph of May 2nd gives the particulars of the late fire in that place, which is supposed to be the work of an incendiary. The cotton sheds and their contents of Messers. James & Bayly, and Compton, Ricks, & Co. were destroyed, together with the property of others lost more than 13,000 dollars.”

According to The Natchez Courier (Natchez, Miss.) August 25, 1852
Fire at Rodney – “We learn that Sunday morning last, about 1 o’clock, a fire broke out in the kitchen of the Hotel at Rodney, and rapidly spread through the town, consuming almost every house and store. The saw-mill of the Messers. Weldon was several times on fire but was fortunately saved without much damage. We also understand that the store of Messers. Drake & Griffin was saved.”

The following description of the last fire was given by the officers of the Steamer Richmond, as she passed the Town during the fire.

“Wednesday night, shortly after we left Vicksburg, a bright light was observed on the southern horizon. All manner of speculation was rife on board concerning the cause and as the light grew nearer and nearer the interest grew in proportion. At last, after several hours of eager watching we bore insight of the beautiful Town of Rodney and lo, we beheld it the object of the wrath of the fire king. The whole village was wrapped in a mantle of flames and as at two o’clock in the morning our boat glided swiftly down along the other shore, the scene was grand beyond description, lit up as it was by the lurid lights from burning buildings, mingled with the moon’s pale beams.”

THE CIVIL WAR IN RODNEY

There is no greater before and after event than the American Civil War. Undoubtedly, the country was forever changed and of course, Rodney (and the rest of the United States) would never be the same. By 1863, the Civil War was raging in Mississippi and Rodney felt the impact. Located about 50 miles downriver from Vicksburg (the Confederate capital that fell to Union troops in 1863), they saw their share of battle here in this time capsule of a town.

After the fall of Vicksburg on July 4, 1863, the Union Navy was left in charge of the Mississippi River. The gunboat Rattler was stationed in Rodney to monitor activity in this important port town. As the story goes, the Union men liked to line the decks of the boat on Sunday mornings to watch the Southern Belles in their large gowns going to and from church. While they were instructed to not leave the ship, 24 of them decided to break orders and on September 12, 1863, accepted the invitation of the Reverend Baker of Rodney Presbyterian Church Pastor to join them for services. As hymns were being sung, a Confederate calvarymen arose and announced (after apologizing to Reverend Baker) that his men had surrounded the building and for the Yankee sailors to surrender.

Shots ensued inside the church and many congregants hid behind pews for cover. The crew that remained on the Rattler heard the noise and fired a canon on the church. But the Confederates had the advantage that day capturing 17 prisoners (including the Rattlers Lieutenant and Captain). The crew would live in infamy as the only ironclad gunboat ever taken down by calvary.

But of course, this skirmish wasn’t the only part of the war to leave scars on Rodney. The widespread changes to rural economy post-war hit Rodney as hard as anywhere else as this once-important cotton shipping port struggled to survive.

The Decline of cotton trade after the war was just one of many blows that would be dealt to Rodney.

As if that wasn’t bad enough, Mother Nature herself would bring what would be the final blow to the hopes of reviving this rural town. The Mississippi River has dictated the fate of this town since it was founded. To be sure, there wouldn’t be a Rodney if not for its location (and eventual port) along the river during the steamboat era. But the town that was created by the river has been destroyed by it as well and in more ways than one.

At one point, Rodney was the busiest river port between New Orleans and St. Louis but around 1864, a sandbar started to form in the Mississippi and by 1870, the river had changed course.

Trains had trouble chugging up some of the area’s steep hills, so the rail lines built to the east. By 1940, Rodney was a full three miles inland from the river. Cut off from the river and hurt by the decline of the cotton trade after the War, the town slowly began to die.

By 1900, Rodney’s population had declined significantly, causing most of the commerce and community to shut down and by 1923, the Presbyterian Church had lost its full-time pastor. In the 1930s, the Mississippi state legislature revoked its status as a township.

And if those weren’t reason enough to lead this to ghost town status, lets add in catastrophic flooding semi-regularly.

While the Mississippi might’ve moved from Rodney’s direct reach, it would bring frequent reminders in the form of devastating floods that would wreak further havoc into the town, with particularly bad years in 1912, 1916, 1927, 1935.

Floodwaters are typically high enough to reach the steps of both churches, although in heavier years, the Baptist Church has been filled inside to the windows with standing water. Floods have continued semi-regularly into modern-day as well, with a particularly devastating flood season in 2011. These concerns have made it difficult to imagine a future for Rodney moving forward.

Much of what was original Rodney is long gone due to fires, except for the Presbyterian Church which still stands today. Mt. Zion, Alston’s store, and the Masonic Lodge which you can still see today were built after the fires.

Below, are old photos to bring us a better vision of what Rodney once looked like when it was alive and full of life.

Built in 1832, this is the only building from the original town of Rodney that is still standing. This Federal style church is a unique example in the region and still shows damage from battle during the Civil War. This church is currently in desperate need or restoration. You can read more about it HERE.

Built in 1851, this church has been used by at least 3 different congregations. Sadly, whenever the Mississippi River floods, this antebellum church becomes partially submerged, causing extensive structural damage.

This Carpenter Gothic style church was built in 1868. It fell into disuse for years until 1983 when it was moved nearby to Grand Gulf Military Park and restored. Read more about it HERE.

Built in the 1840s by contributions of the citizens, this is the only schoolhouse ever built in Rodney. At first, it was a two-story building, the lower story, brick, and the upper story, frame with two classrooms on each floor. At one time in the 1850s, the enrollment numbered one hundred and fifty students

Rodney had a variety of social lodges but this is the only remaining building. At one point there was both a white and African-American Masonic Lodge in Rodney.

The People of Rodney

Most of the people may have left Rodney, but I have been working to dig up as many of their faces and names as I can so we can visualize the people of the past who once called this home.

Whenever possible, I will add more to their stories and as for the images without information, I don’t know all of their backgrounds in full detail, but we feel they deserve to be a part of this story anyway!