The land we now know as Georgia contains some of the richest and most fertile land on the planet but at the end of the Revolutionary War, most of it was owned by Native Americans – Cherokees to the north and Creeks to the south. This 1779 British map shows Georgia to be a vast wilderness positioned between the Crown possession of South Carolina to the North and Spanish Florida to the south. This “Province” of Georgia was known as “the debatable land” when James Oglethorpe established Savannah in 1733. At the end of the Revolutionary War there were only 30,000 non-Indian inhabitants, split evenly between whites and enslaved blacks, clustered along the coast and the Savannah River. Virtually all land west of the Savannah River was Indian land (Cherokee to the North, Creek to the South), and unavailable for legal settlement. There were no towns, no counties, no roads…….just a vast wilderness that the map describes as “Exceeding Good Land”. 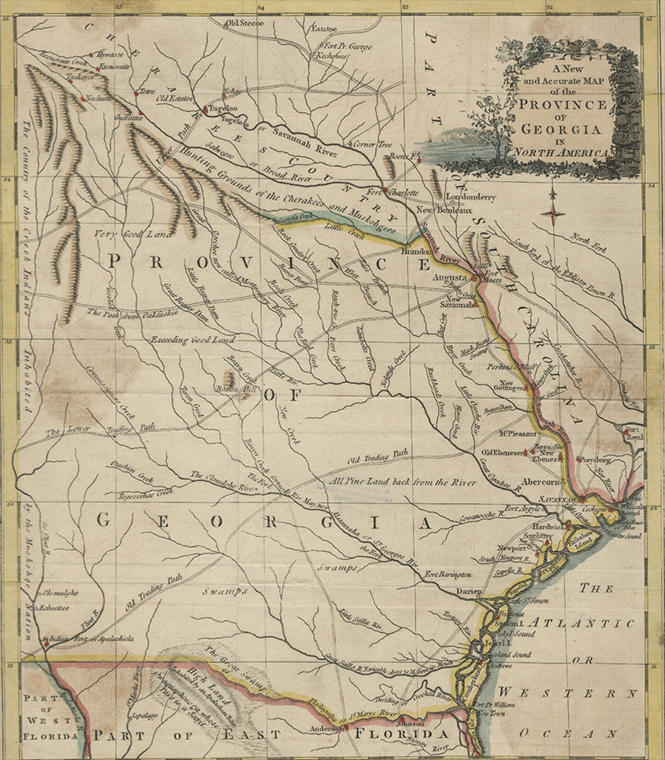 In a short period of time after the war, Georgia managed to “acquire” over 35 million acres of land from the Creeks to the south and the Cherokees to the north. Much has been written about this period that was marked with turmoil and bloodshed and, some would argue, very questionable ethics. The hunger for additional land was relentless and Georgia expanded westward though a series of Indian cessations that gave up their traditional territory river basin by river basin. By ___ the Ogeechee River was the western border, then the Oconee River in __, the Ocmulgee in __, the Flint in ____, and finally the Chatahoochee in __. At the time of this map in 1827, the western boundary of Georgia was the Oconee River. With this incredible land bounty, Georgia was flooded with settlers of European stock. Unless you were of noble birth, you had little chance to acquire any land in Europe and therefore the prospect of virtually free land was an unprecedented and extraordinary event. In this post Revolutionary War environment, veterans and other land hungry settlers poured into Georgia. Most of these settlers lived in rough log cabins and set to clearing land and raising crops for subsistence, as well as barter for tools and materials. There was much conflict with the native inhabitants. 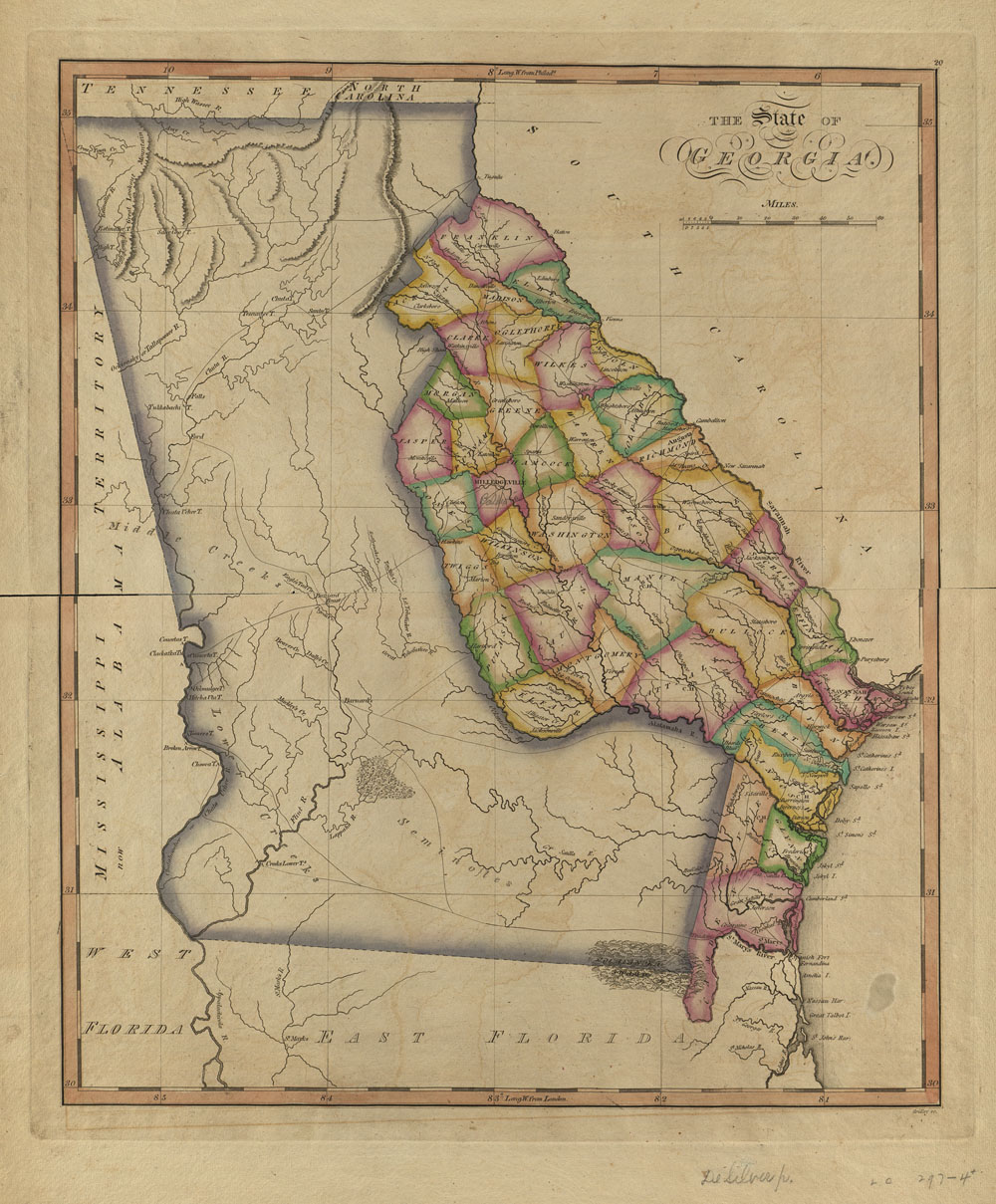 Having acquired all this land, the government of Georgia had to decide what to do with it, and they devised a unique “lottery” system of distributing it in small parcels (40 to 400 acres) to these tough settlers willing to move into this vast wilderness and start working the land. Preference was given to Revolutionary War veterans. Three fourths of these lands were distributed this way via the lottery system over a period of 30 years. By 1835 Georgia’s boundaries were set and partitioned into 80 counties. It should be noted that this same footprint now contains 159 counties. The land acquired on the frontier by the lotteries was originally used for tobacco cultivation, but with the introduction of cotton and the innovation of the cotton gin, agriculture shifted to large-scale cotton production. The need for labor to toil on these plantations across the state called for more and more slaves. Therefore, the land lottery not only increased the landholdings of common Georgians but also increased their ability to become slaveholders and enter the planter class. However, on average, Georgia planters held less land than their contemporaries in other southern states as a result of the lottery system, reflecting the power shift from large landholding aristocrats to yeoman farmers. The use of slaves in this agricultural system was widespread and by 1820, slaves made up 44 percent of Georgia’s population. 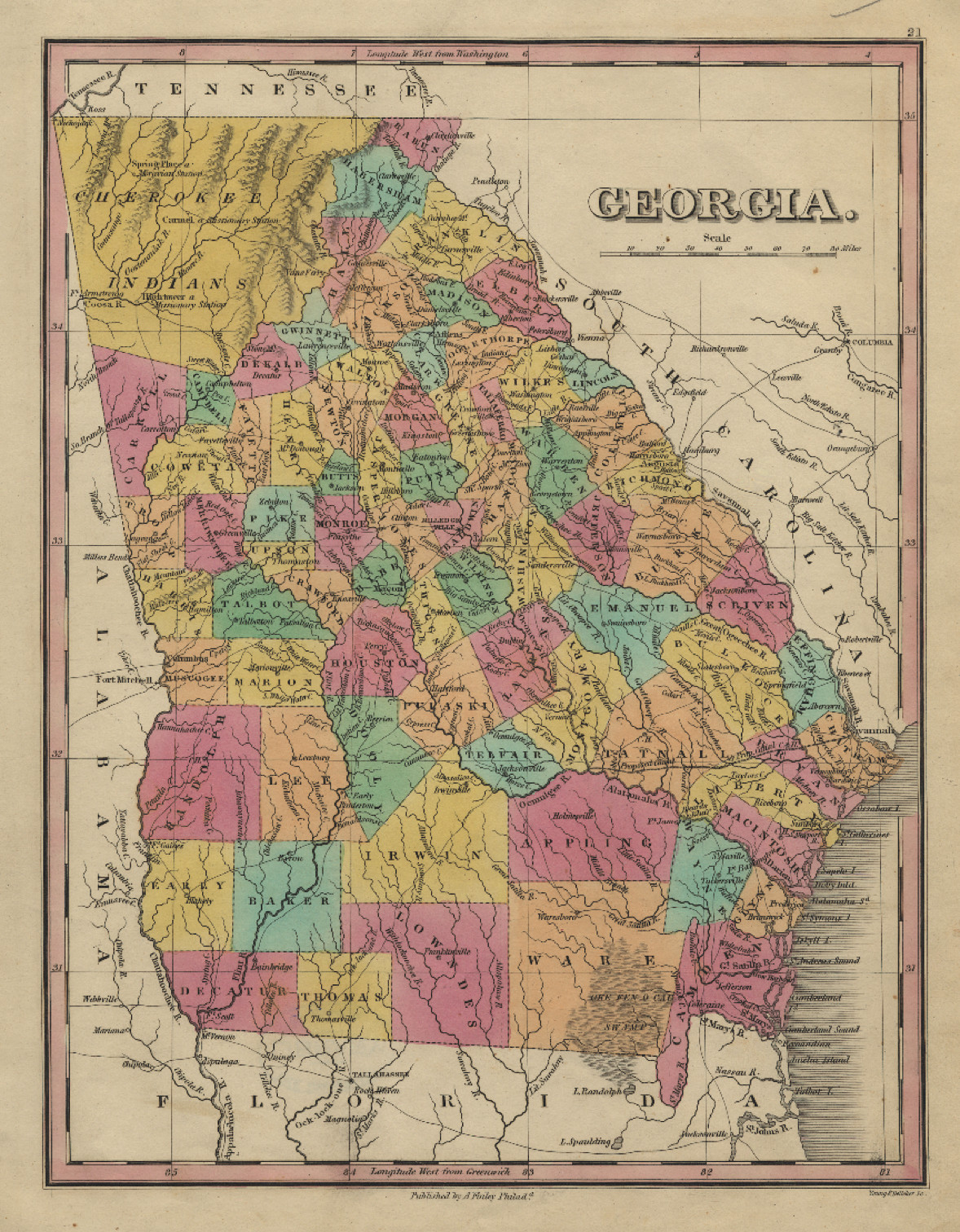 Central Role Of The Church

The first thing these European settlers did was to establish a church which embraced all the neighbors within a few miles.  While, the churches provided spiritual comfort it was more about creating some sense of community and stability. The churches were the center of everything for these early yeomen farmers. The church was community center, dating service, court house with judge and jury, and everything else that a community had to have to function as a civilized society. The early churches were established at the beginning of each new treaty and the resulting land settlement.  As soon as the new community of pioneers moved in and began the process of clearing land and planting crops, the churches quickly appeared. Sometimes the congregation met with barely a roof over their head in “brush arbor” structures. But soon there emerged a communal place of fellowship and worship that usually involved a simple, one room building with various structural enhancements that were part of the accepted religious architecture of the time. These early churches ranged from primitive outbuildings to more elaborate structures and they were hand built with whatever local materials were at hand. Though simplistic in structure they projected hope, comfort and safety with an architectural dignity that was appropriate for the center piece of this rural lifestyle. This website will tell some of the stories of these early Georgia pioneers using the church, its architecture, its history and its cemeteries as the focus that it deserves.

The county system is the bedrock of the American governance system within each state. It evolved from the English system which began as “shires” in the 7th century but evolved into a county system over time. In America, counties serve as the principal political subdivision of each state, although how many counties and the number of people served per county is another matter. Georgia now has 159 counties, second only to the state of Texas, which has 254.

Why so many counties? Lots of reasons, but mainly because it was relatively easy to do and certain people benefited from the creation of a new political entity complete with power, jobs and money. In 1755, the Church of England subdivided the colony into eight original “parishes”. By 1800 the Revolutionary War was over and there were now 24 counties in Georgia. By 1833 Georgia’s external footprint was complete and Georgia had 89 counties. Over 37 Million acres had been “ceded” from the Creeks and the Cherokees in less than 75 years. Today’s 159 counties are the result of an additional 70 counties being carved out of the original 89.