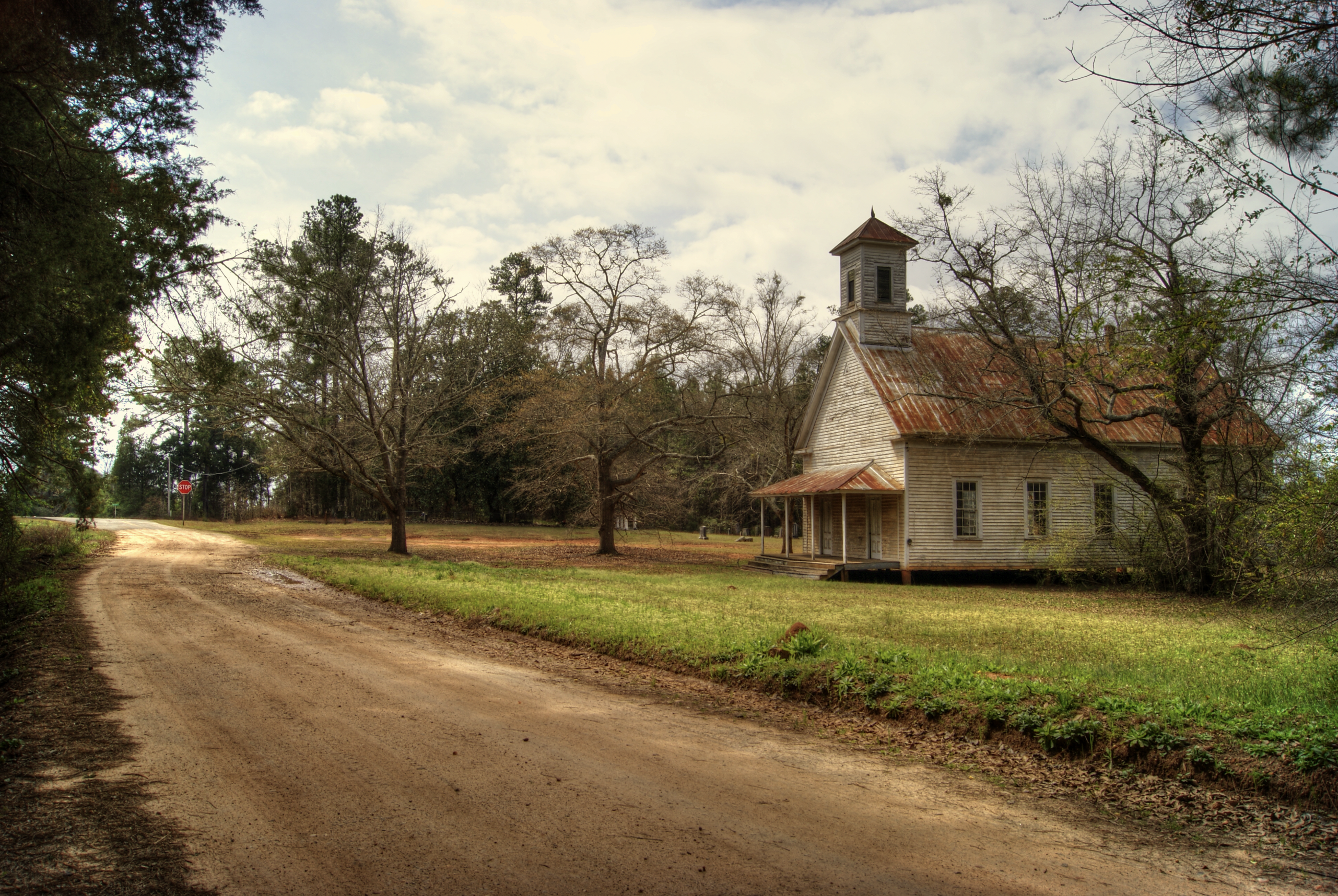 The story of the village of Powelton is an all-too-common one along the back roads in Georgia. A farming community pops up somewhere on the map, grows, thrives, and then all but disappears.

Such is the case here in Hancock County where two churches and their adjoining cemeteries are just about all that’s left to tell us the story of this once important place that is thought to be one of the oldest settlements in Georgia.

From early records, we know that a village began to form here along Powell’s Creek in the late 1700s. Back then, the area would have been inhabited by natives and new settlers who were arriving from the north during the Revolutionary Era. But things would change drastically in the early 1800s when the Georgia land lotteries began, encouraging even more settlement from people who moved here from Virginia, the Carolinas, and New England.

While some of them were yeomen (smaller subsistence farmers) but the wealthy planter class arrived as well and the economy of Hancock quickly shifted to one based on cotton. Numerous fine homes and plantations were erected in the area as the planting class prospered. They relied upon the labor of enslaved people to cultivate their expansive cotton farms and as a result, their agricultural activity brought a great deal of wealth to the county.

Powelton thrived in the early 1800s opening a post office in 1804 and being officially incorporated in 1816. At that time, the village was filled with many of these new wealthy families, some of whom had been drawn to the community for its well-renowned male educational school, Powelton Academy which was established in 1815.

A handful of distinguished academies like the one at Powelton had been established across Hancock County, typically founded by either Baptist or Methodist churches. Such was the case in Powelton, where church trustees from the Baptist Church prioritized education for their sons.

This tradition continued on with the legacy of Powelton Baptists’ prolific father and son Reverends, Silas and Jesse Mercer, for whom Mercer University is named.

As the population of the community grew, its importance to the agricultural economy of the county expanded as well. At one point, it was said that all roads led to Powelton as it sat at the cross of an important junction of East-West and North-South wagon roads that connected larger cities like Augusta, Greensboro, and Milledgeville. As a matter of fact, when the capital of Georgia was being relocated from Louisville, Powelton was considered as a contender, but lost by two votes to the eventual capital of Milledgeville nearby.

In 1822, an important conference was called here at the Baptist Church and would lead to the formation of the Georgia Baptist Convention. By that time, Powelton Methodist Church was also established, located just a few hundred yards from the Baptist Church.

Back then, these two buildings would have been the heart and soul of this community where people met to celebrate, worship, grieve, and socialize with their neighbors. Where countless events, dinners, weddings, and baptisms have been held over the years.

But just as quickly as this place sprung up on the map and rose to prominence, so too it would disappear.

From accounts based on local stories, things began to shift in the county in the years leading up to the Civil War. By 1860, many of the wealthier families had left the town, some of them even dismantling and bringing their homes with them.

When the war broke out, many young men from this village reported for duty and many didn’t come back. When the war ended, the economy that was so heavily dependent upon cotton and slave labor, collapsed almost completely.

As with the rest of the nation, this small community struggled to find its footing in the Reconstruction Era. In the years that the railroads came through, a depot was installed 10 miles away in Barnett, making Powelton even less connected. By 1900, the population had dwindled down to just 162 people. In 1913, the town’s official charter was revoked and the Post Office was closed for good.

Hancock County, once one of the wealthiest in the state, is now amongst the poorest in Georgia, and small towns like this one bear the scars of a century of hard times. Today, very little is left of the fine family homes that used to dot the road into Powelton, save for a few of them. In fact, if you had the chance to drive through now, you might pass right the crossroads that used to be so significant without a second thought. If it weren’t for the two special churches that still stand today, we wouldn’t have the opportunity to glimpse into what life might have been like back then. We hope that the photos collected here will help to contribute to the memory of this place as well.

From its earliest days, education was a priority to the people who called Powelton home, starting with the Powelton Academy that was founded in 1815. In the years after the Civil War as the population dwindled, schooling options were limited until the 1890s when a one-room schoolhouse was constructed, and then later in the early 1900s when an expanded school building was built next door, called the S.N. Chapman School.

The People of Powelton

While researching this town, several founding family surnames were mentioned repeatedly, some of which are: Barksdale, Burnley, Chapman, Cooper, Herndon, Johnson, Mercer, Ogletree, Rainwater, Rocker, Seals (Seale), Spencer, Veazey (Veasey), and Wynn. Below, we have collected as many photos as were available to us from some of the aforementioned families.

*If you have additional photos to contribute to this post, please email them to us: info@hrcga.org

The Cooper Family had a large family and home in Powelton, although the home is gone, their small grocery store still stands today on private property.

The Seals (Seale) Family can be found in Georgia as early as the 1780s and according to records, William and Judith Powell Seals were the first of the family to arrive here in what would become Hancock County in the 1790s. Like many other families in Powelton, the Seals Family sent many sons away to fight in the Civil War, one of whom was William D. Seals, who later married Sally Herndon Seals.

Built 1850s, this family home was expanded around 1900 to enclose the kitchen. Back then, the family raised Hereford Cattle and grew tobacco, but today, the land is used as a pine farm and leased seasonally to hunters to hunt hog, deer, and turkey. We were able to track down a Barksdale Family descendant who graciously shared this collection of family photos with us, dating back to the 1880s.

The James E. Veazey Family came to Powelton from Cecil County, Maryland by way of Granville, North Carolina sometime before 1789. They grew a large family here and had extensive land-holdings around Hancock and the surrounding counties.

The Chapman Family appears in Hancock County records as early as the 1830s and can be found spread about the Hancock and surrounding counties. Samuel Newton Chapman (1837-1910) studied at Penfield College to be a teacher. In 1859, he married one of his students, Emily Boone and they would go on to have 12 children together. In 1862, he enlisted to fight in the Civil War for the C.S.A. Company D, 49th Regiment, Georgia Infantry. He was discharged in 1863 after an injury incurred at the Battle of Seven Pines. Chapman returned to Powelton and continued his career in education, eventually building the S.N. Chapman School at Powelton in the early 1900s.

The Cemeteries of Powelton

Although the community has come and gone, their stories and legacies remain in the cemeteries of Powelton. One of the most significant burials here is of Georgia Governor, William Rabun, who was born and raised here. He caught a fever and died unexpectedly at his home in the town of Powelton in 1819 between legislative sessions. The Rev. Jesse Mercer delivered his eulogy at the request of the General Assembly. Two months after his death, they named Rabun County in his honor from lands recently ceded from former Cherokee territory.

While there are many smaller family cemeteries scattered around the area, those listed below have been surveyed and added to the database on Find A Grave and Friends of Cemeteries. If you are researching your family’s connections to Powelton, you can click the links in the list to read through the burials located here.

Make Sure You Don’t Miss Out on Future Blog Posts by Signing up For Our Free Newsletter!