The Ghost Town of Grooverville 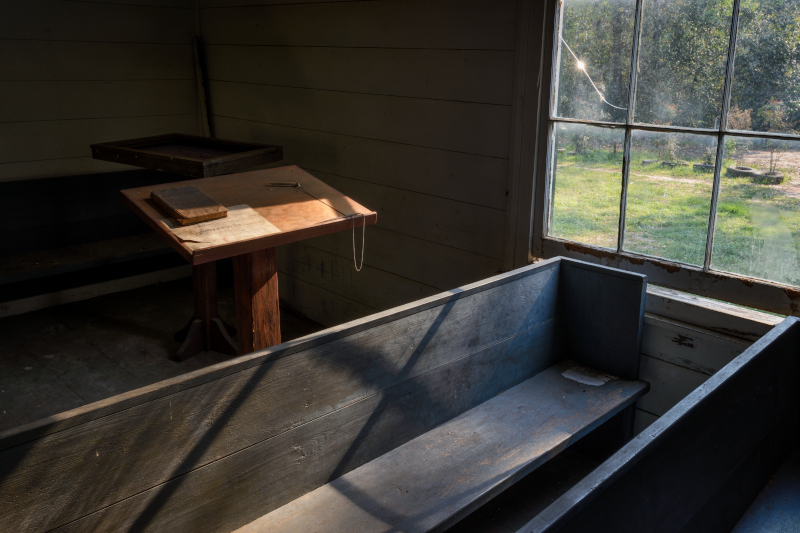 The Ghost Town of Grooverville Lives on Through its History

Tucked in Brooks County, hard by the Florida line, is the little town of Grooverville. Calling this peaceful stretch of landscape a “town,” however, might be something of an exaggeration. There are no government complexes, no commercial district, no professional buildings, no extensive residential areas, and no city center. There are a few historic churches, several homes, and acre upon acre of farmland that fan out from the crossroads that define what remains of communal life. It’s a place you might pass through, far from the interstate, if you’re going to St. Marks, Florida, or visiting family in Boston, or conducting business at the courthouse in Quitman. It’s almost hard to believe such a place exists in the twenty-first century, far from the jostle of people, the cough of machines, and the canopy of pollution most urban dwellers know. But it does and it has, for over one-hundred-and-sixty years, serenely abiding through generations of families and season after season of their crops.

Between its incorporation in December 1859 and the legislative revocation of its charter in July 1995, it contributed to the unfolding history of South Georgia, adding lines to the story that would not have been recorded otherwise. After the loss of its charter, Grooverville was designated an Historic Township by the State of Georgia Department of Community Affairs. It deserves to be remembered if only for the lives it long supported and the traces they left, and by telling its story we preserve its memory.

On December 23, 1822, Commissioner General John Coffee of Telfair County, Georgia, opened the first road into what was then Irwin County. Named after him, the Coffee Road cut south from Jacksonville, on the Ogeechee River in his home county, through Irwin County, through Lowndes into Thomas County, and by way of Thomasville into Florida. County lines would shift, territory assigned to one and then reassigned to another. But the Coffee Road would remain as the most reliable, well-travelled thoroughfare from central Georgia into its southern central regions.

Before the Coffee Road opened the territory for white travel, Apalachee Indians were occupying the region when Spanish explorers and priests made first European contact in 1570. By 1812 the Lower Creeks had replaced the Apalachees and within six years had ceded what became known as “The New Purchase” lands to the state. In December 1818, three counties were formed from this ceded land: Appling, Irwin, and Early counties. Irwin was carved up and provided land to form adjacent counties, Thomas among them. While there were no white residents in this area in 1820, within two years of the clearing of the Coffee Road, there were some 200 families that had taken advantage of the access to available land and moved in to settle. James Groover was among the first of these pioneers. He and his family found suitable land on Aucilla Creek, and established a reputation such that one account remembers the family “whose very name still tells of one of the best settlements of the Wiregrass.”

James was a great-grandson of Peter Gruber, a Salzburger Lutheran who had been forced from his native Salzburg for refusing to renounce his Protestant faith as a condition for living in the Catholic principality of Prince-Archbishop Leopold Anton von Firmian. He and his defiant co-religionists had found their way to Augsburg, Germany, and from there, with English royal backing, to Rotterdam, Dover, and then to the new colony of Georgia in 1734, a few months after its founding. As with the other Salzburgers, he found a home in Ebenezer, near the coast. By the end of the century his descendants had spread out to Bulloch and Chatham counties. The 1820 land lottery prompted John Jr., James’s father, and some of his Gruver relatives to move from Bulloch to Thomas County in the southern part of the state by 1825. Another of Peter’s grandsons, Solomon, was listed in the 1830 federal census for Thomas County, and a great-grandson, Malachi, Solomon’s son, had joined them by the 1840 accounting. As the decades passed, the spelling of their surname changed from Gruber to Gruver and finally to Groover, becoming more Anglicized to reflect cultural pressures and administrative requirements. It was Malachi Groover who would be so critical for the planning of Grooverville.

Establishments emerged to provide services to the cluster of Groover families in Thomas County. Hamilton W. Sharpe, from Tatnall County, built a small store on Coffee Road to sell goods to the settlers near the home of Judge Sion Hall, also a public inn where the first court in Lowndes County was held in 1826. The third post office in Thomas County (after those in Franklinville and Sharpe’s Store) was started in 1833 on Mail Route No. 2416 from Thomasville to Monticello, near this gathering of Groover families, with Joshua S. Groover as postmaster. (The post office would move in 1879 to Dixie to follow the railroad.) Before it was incorporated, the settlement was known as Station No. 18 and Key.

By 1856 this land occupied by Groovers at the crossroads of a stage way from Thomasville to Troupville (then the county seat of Lowndes County) was marked out in plats by Malachi to define a town. Malachi deeded an acre of property to Richard Ramsey, M.W. Linton, and W.R. Joiner, trustees of the Methodist congregation that started meeting in a brush arbor of William H. Ramsey’s, and then in a log church called Lebanon. With this deed of gift, and construction of a church building, the Grooverville Methodist Church was born. The structure still stands as perhaps the oldest church building in the county.

In December 1858, Brooks County was formed from Lowndes and Thomas Counties, and the village of Groovers was thereafter listed in Brooks. That same year Liberty Baptist Church was built close to Grooverville Methodist. Founded by the missionary convictions of Nancy Hagan in 1841, Liberty Baptist had eight original organizing members, including Sarah Ann Groover. It remains as an historic site and another anchor of the community. By the date of Grooverville’s incorporation in December 1859 as a town, in addition to these two churches, there was also a Masonic lodge, two physicians’ offices, blacksmiths, merchants—evidence of an active community. The Grooverville Academy, a two-story structure that served as one of the only schools in the area, flourished in the latter decades of the century and into the next, although the date of its founding is uncertain. Prominent citizens like Dr. James Irwin Groover, Richard Ramsey, and his brother, Owen, who had married Martha Elizabeth Groover, a great-great-granddaughter of Peter Gruber, built substantial homes before the Civil War in Grooverville. Both of the Ramsey homes are still occupied; however, the Groover home burned several years ago and no longer exists.

The thriving town of Grooverville was significantly diminished by the trauma of the War and Reconstruction. Many families moved to nearby communities and others left the region entirely to pursue life and opportunity elsewhere. One account tallies James Groover’s land holdings in 1859, when Grooverville was incorporated, as several thousand acres (his lifetime ownership is estimated to be over 25,000 acres). But by 1920 James’s descendants owned only a few hundred, and, according to Dana Groover of North Carolina, by 2009 there were no known land-owning descendants of Peter Gruber left in Brooks County.

Though there are none living in Brooks County, there are many who remain in eternal rest there. In 1845 James Groover buried his grandson in a plot across from his home. Family members were laid to rest beside him as the years passed and by the 1870s the tract was known as “The James Groover Graveyard.” What is now the “Groover-Ramsey Cemetery” in Grooverville holds the remains of Groovers, Ramseys, McKinnons, Thomases, Shepards, and others related by marriage or blood to James Groover, representing a web of connection that binds many of the families that called Grooverville home.

The environmentalist Edward Abbey once wrote, “Men come and go, cities rise and fall…the earth remains.” Quiet now, the crossroads of Grooverville has seen commerce, transportation, agriculture, one generation replacing another, peaking before the War and slipping into obscurity in the decades that followed. But for those with ties to this land, this is a special place, a space for family and memory, and history. And for that reason, it will never slip completely away.

The church buildings in Grooverville are privately owned and not regularly open to the public. Please be respectful and enjoy them from the road.