How Glendale Chapel was Saved 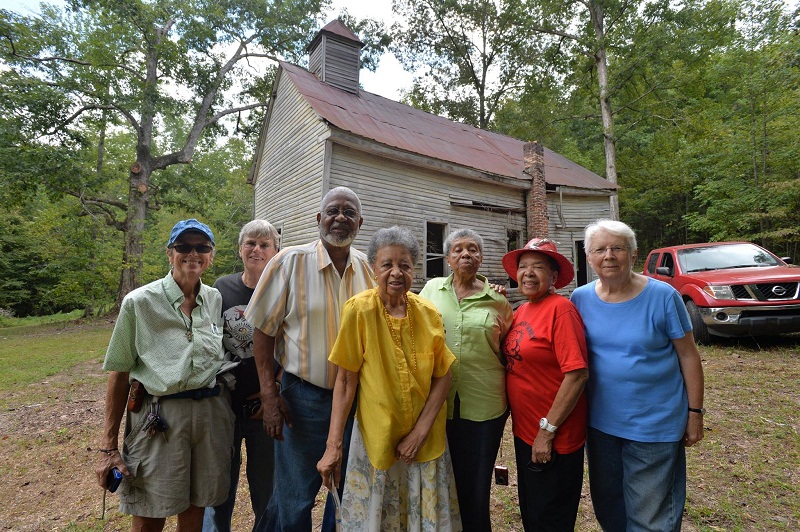 “THIS WAS MY FOUNDATION. WHEREVER I WENT, WHATEVER I DID,

IT ALL STARTED HERE.”

Glendale Chapel Methodist Church, located in the foothills of northwest Georgia, stands today because a community came together, and through unwavering determination, saved the chapel from an all-too-common fate.

Glendale’s restoration is a story of respect for the people who fashioned our Georgia agrarian roots, and of their reverence for the role of religion in forming their community life. The story of Glendale Chapel helps us all to understand a more complete narrative of Georgia’s early rural history and an opportunity to better understand Georgia’s African American communities in the rural landscape, which are largely under-documented.

This church was founded in 1878 by Green and Rachel Johnson who were formerly enslaved people in Floyd County, northwest of Atlanta. Services were originally conducted under bush arbor until this structure was built of trees felled on site when it was first used in 1879.

Services continued here until the 1960s, and just as many of these rural churches did, this structure also served as a school for local African American children who were forbidden from studying with white children in the 1940s Jim Crow Era. The church schools were recognized by the county board of education and their teacher paid by the county, but the rest of the cost was carried by the local African American community.

The Johnson sisters remember their school days in their church, bringing their lunch, sitting around the wood burning stove, learning the basics and also learning about their African American heritage. Eventually, the church school closed due to loss of county funding. However, the community came together again and paid for a teacher working out of a local home for two years before the parents arranged for the children to attend the only elementary school for African Americans in Floyd County over 25 miles from the Valley.

Jennie Johnson Jones remembers that as a time of confusion and distress. However, her experiences in the Glendale Chapel school and the pain of the loss of those two years in a formal school, inspired her to pursue a lifetime of learning, eventually earning her Masters Degree in Education.

By the 1960s, the congregation had been reduced to such a small number that the remaining members joined a larger church nearby in Rome. From time to time, it was still used for occasional funerals and homecomings until the last known gathering happened here in 1988.

The church sat empty and unused and was being slowly divested of its removable elements by thieves who took the oil lanterns that once adorned the walls and a brass bell that hangs in the cupola.

At one point, the church was used as a bunkhouse and it is thought that wood from the walls was burned to keep inhabitants warm.

LIKE SO MANY GOOD THINGS THAT HAPPEN IN LIFE, SERENDIPITY PLAYED A ROLE IN SAVING GLENDALE CHAPEL

Annie Shields and Patricia York, equestrian therapists for the deaf, bought the property that bordered on the chapel’s land.

While looking for more space to exercise her horses, Shields came upon Glendale Chapel.

She and York decided they would find the owners of the land, buy it, and set about saving the Chapel.

Through them and their family, the rich history of Glendale Chapel has been brought to life – the joyful gatherings, as well as the painful hard times its congregants, shared inside those walls and around that churchyard.

As the chapel’s restoration plans were being formed and implemented, the story took what could have been a tragic turn.

The stresses of time, weather, and neglect had taken their toll on the structure.

During the renovation, Glendale literally fell apart, turning that compelling old church into yet another heap of wood by the side of the road.

Fortunately, no one was hurt and the small group decided to persevere.

They discovered that the original church had been unpainted and was constructed in the board and batten style from white oak trees cut from the property. It turns out the little church had been covered with siding and painted white in the early 1900s.

The group decided to go forward with the original construction style and use as much material from the remains as they could.

The church has been restored to its original glory and gifted us with a glimpse into the history of people like the Johnson family, who are entrusting us with the responsibility to preserve and pass on their rich tradition.

Kudos to the entire group for the vision and perseverance it took to do it. We owe all of them a debt of gratitude for their stewardship.