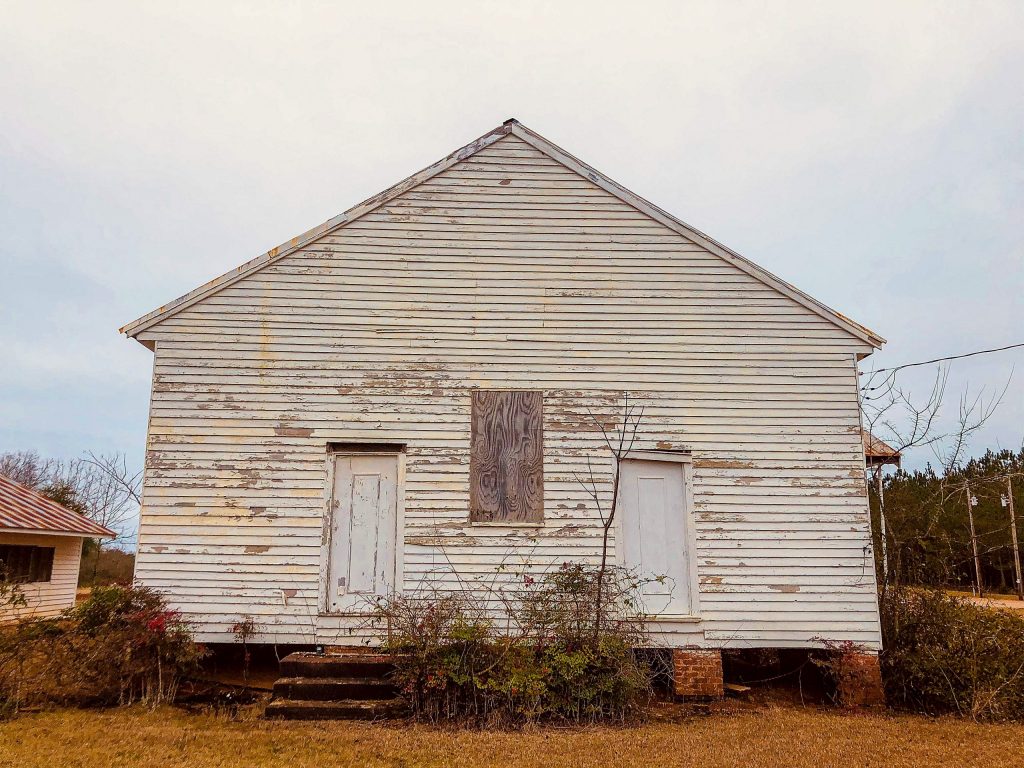 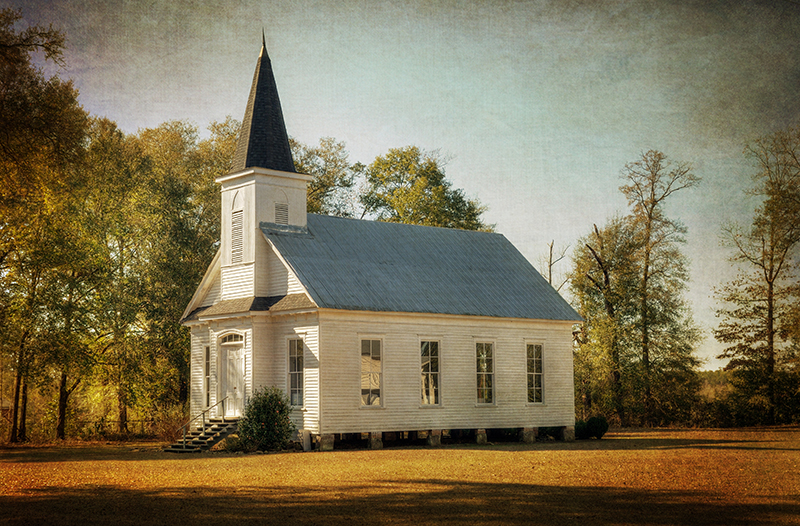 Antioch Primitive Baptist Church was founded in 1832 in Pleasant Valley, then moved to Moccasin Gap in 1842 and finally to its present location in Louvale in 1851. Louvale was then known as Hannahatchee, named after a nearby creek. The present church was erected in the mid 1880’s to replace the original log structure. Louvale is a small farm community in the western part of Stewart County and is the site of Louvale Church Row. Church Row is listed on the National Register and consists of three church buildings dating from the late 19th century.

Church Row came about as a result of land donated by Dr. William H. Tatum. Dr. Tatum had acquired land adjacent to the Antioch church and donated some of it, first to the congregation of Marvin Methodist church and later to the New Hope Baptist congregation. Dr. Tatum’s vision was that Louvale (formerly named Antioch) would become a thriving railroad town as a result of the Americus, Preston and Lumpkin railroad being built in the late 1880’s. Unfortunately the railroad fell on hard times and ultimately went bankrupt, resulting in Louvale becoming just another rural Georgia farming community…….although a charming one that still retains its historical character.

The church itself is simply elegant. The center steeple design in combination with the simple but tasteful main entry into the sanctuary makes one wonder how these early Georgia builders acquired such a sense of tasteful, religious architecture. It is quite moving. The liberal use of windows on all four sides of the small chapel seems so appropriate for the architecture while also providing an abundance of light and ventilation.

Providence Methodist was founded in 1832 on two acres of land donated by Rev. David Lowe. The first structure was a log building, which was replaced by the present structure in 1859 on two acres of land across the road from the old church. The church is located in what is now Providence Canyon State Park, and was named for the church. These “canyons” are billed as a tourist attraction and a “remarkable natural wonder that is sometimes referred to as Georgia’s Little Grand Canyon”. However the canyons are, in reality, the result of poor farming practices that were common in the mid 19th century. Massive erosion in the soft, unstable sub surface became the canyons of today in a relatively short period of time. This was not uncommon in Georgia where abundant cheap land led to many years of agrarian abuse.

The church is one of the oldest in the county and has been preserved virtually intact. It has some unusual construction features that are worth a close look, including the hipped roof, which was unusual for the time period. The following photos are a visual feast and a tribute to the old settlers who populated and worked the land prior to the Civil War. The cemetery contains many of these original settlers. The old minutes also reveal that in 1861, there were thirty seven slaves who were members of the Providence Church. According to the History of Stewart County, “The road from to the church was once a prominent Indian Trail. It turned at the present site of the church, continuing on to the present site of Omaha and on to the large village of Oconee on the Chattahoochee.

To give the year of 1832 and the relations with the Indians some perspective, legal settlement began with the state’s fifth land lottery, held in 1827. Unfortunately, the treaty that wrested west Georgia from Native Americans ended in conflict. By 1836 the remaining Creek Indians began ambushing homes and communities in desperation. The settlers called on Governor Schley for protection. Schley sent state militia volunteers from Gwinnett County to establish three local forts—Ingersoll, Jones, and McCreary. On May 15, 1836, the river settlement of Roanoke was burned by a reported 300 Indians. On June 9 the Battle of Shepherd’s Plantation marked an end to skirmishes in the county and, essentially, in the state.

We are grateful to the members of the Lumpkin Methodist Church who have “adopted” this historical icon and have been such good stewards. She stands just like she did in 1859 as the south was sliding into the abyss of the Civil War. The cemetery is quite a visual treat as well, containing many of the old original settlers. These hallowed burial grounds contain many unmarked graves of the original residents that were originally marked with wooden markers and/or field stones that have disappeared over time. Old Providence is still standing tall over these grounds as she has for over 150 years. She is a real treasure. 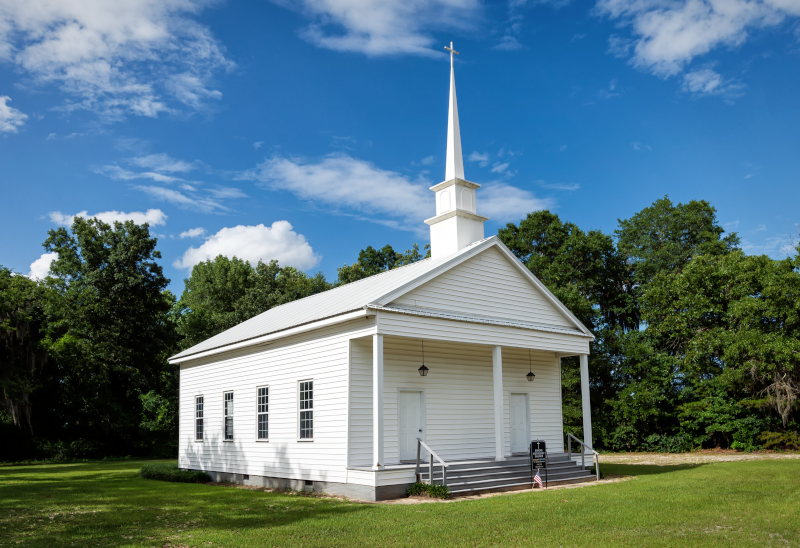 This is the original sanctuary of Sardis Methodist built in the late 1840’s. As you can see, the sanctuary has had some loving care and maintenance over the last 160 years or so. Some needed improvements have been made over the years but the congregation has made a concerted effort to respect the history……and especially so with regard to the interior. The church was built by Joseph Sessions and his young nephew, Benjamin Franklin Barge. Mr. Sessions donated the land along with some of the building materials and lots of labor by the local community of Trotman. A local history states that some of the material was brought in from Richland by ox cart. Virtually all of the interior is original and a feast for the eye.

According to the local history, the church had fallen victim to termite damage and dry rot in the late 1970’s and the congregation was faced with the decision of rebuilding or remodeling the church. A building committee was appointed to look into the situation and make recommendations. Fortunately for all of us, the committee recommended the renovation and restoration of the church. With donations from members and friends of the congregation and a grant of $ 3,000.00 from the Committee on Missions and Church Extension, the major work of the renovation was accomplished in 1982. As much of the original material as possible was utilized. A narrow, wooden porch extending the width of the building and similar to the original porch was added. The interior was painted and light fixtures of a design which would have been in style during the nineteenth century were installed.

Sardis Methodist is just a wonderful role model for us all in that it is in a very rural location, surrounded by stately oaks and cotton fields. The congregation has always been small, but that did not stop them from protecting and preserving their rural heritage…..and they are still doing it, with monthly services for the congregation that is supplemented with more than a few visitors. The Barge family has been very instrumental in this effort and the cemetery contains several Barge interments. Benjamin Franklin Barge, one of the founders mentioned above, is the oldest of these (1810 – 1873). The Findagrave site states that ” Benjamin was a Soldier in the Creek Indian War in 1836, starting as a Lieutenant then commissioned as a Captain”. The Creek Indian war was the result of General Winfield Scott being sent to Alabama to deal with several episodes of violence and remove the last of the Creeks from Alabama to the Oklahoma territory. Mr. Barge also served in the Civil War, enlisting in April of 1864 at the age of 54. The Barge roots go very deep in this part of Stewart County and we are grateful for their service. 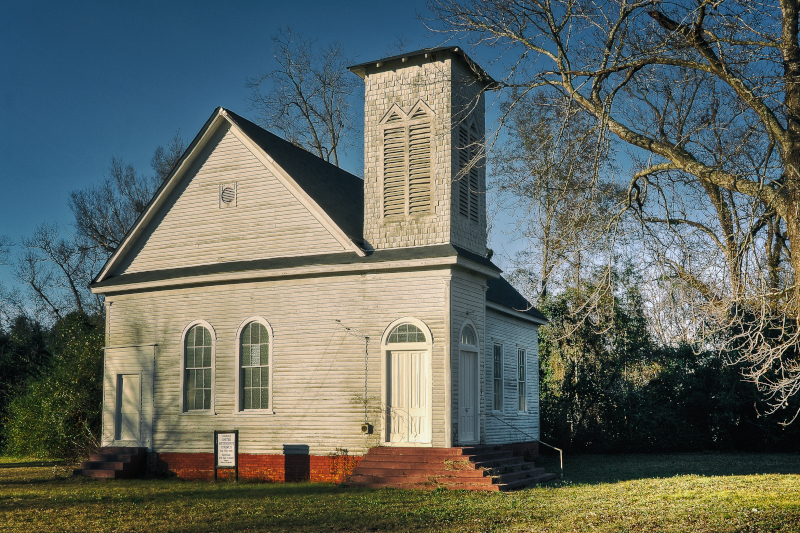 There is not a lot of history available on the Omaha Methodist Church. We do know that the church was built on land that was deeded to trustees J. H. Carter and Arthus Allen in November of 1895. The Omaha Improvement Company sold nine lots of land to be used for a church and a parsonage and both were constructed at the same time. The parsonage was discontinued in 1930 and was sold and razed in the early 1940’s. The church history states that the pews in the church supposedly came from St.Luke church in Columbus but this is not authenticated. There is also mention of a large bell said to have come from England ‘a long time ago‘. The church at Omaha was the successor to the Florence church. The present church, though 120 years old, is still in remarkably good shape. It is a handsome structure of corner steeple design, a very popular style at the close of the 19th century. As seen above, the shingled steeple adds a pleasing decorative touch.

Omaha is an interesting little village located on the banks of the Chattahoochee River south of Columbus and at the top of Lake Eufala. “Omaha” is an Indian(Creek?) Tribal name which means “Upstream People” or “Against the Wind”. According to an old write up, ‘The village was founded in the 1890’s as a result of the Seaboard Air Line Railroad. Omaha, a town in the western part of Stewart county, was incorporated by act of the legislature on Oct. 5, 1891. It is on the Seaboard Air Line railroad, in the Mineral Spring militia district, and in 1900 reported a population of 152. It has a money order post office, express and telegraph services, some good stores, schools, churches, etc. Besides the railroad facilities the town is near enough to the Chattahoochee river to profit by the rates offered by the river traffic, which makes it a good shipping point for the products of the surrounding county’. We would love to have some more history of either the church or the village of Omaha if anyone has any. It is worth a trip to look around. There is a similar looking Baptist church in the village and the three historic churches of Louvale (on this website) are located a few miles away. 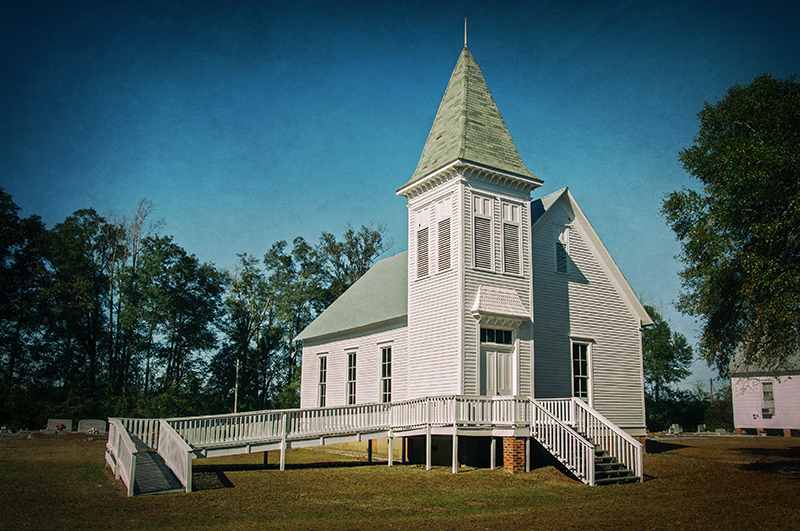 Marvin Methodist came out of the congregation located in Green Hill in the 1830s. The Marvin Methodist congregation purchased the present site of the church in 1899 and the church was built in 1900. It was named for Bishop Enoch Marvin. The land the church is built on is covered by a Warranty Deed dated December 6, 1800. This bit of sketchy history is all we have and we are hopeful that someone will come forward with some more. The church is a beautiful structure and is one of three churches located on Church Row in Louvale. Church Row came about as a result of land donated by Dr. William H. Tatum. Dr. Tatum had acquired land adjacent to the Antioch church and donated some of it, first to the congregation of Marvin Methodist church and later to the New Hope Baptist congregation.

The church makes a beautiful architectural statement that is entirely appropriate to the location, access ramp notwithstanding. It has a corner tower with a prominent belfry. The front entry is on the side through the tower and then into the sanctuary. The structure is beautifully maintained by the present congregation and it is obvious that the congregants of Marvin Methodist have been good stewards of this historic jewel in a remote location in Stewart County.