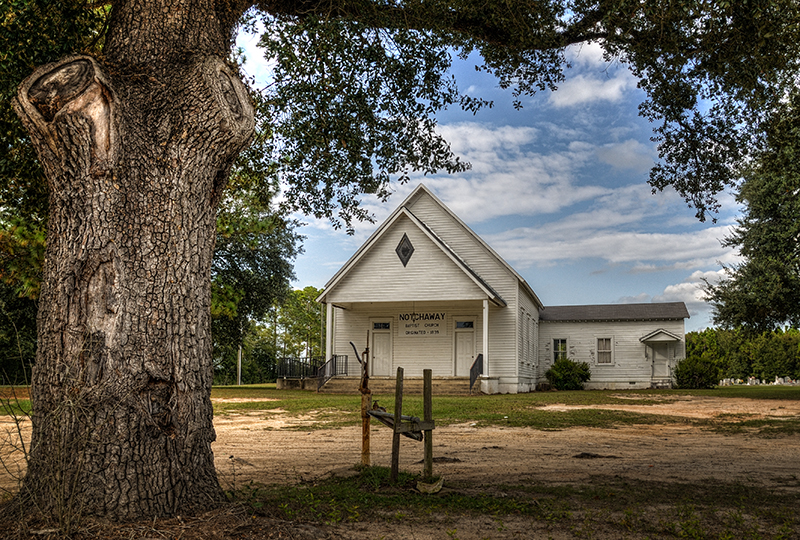 Notchaway Baptist was formed on the banks of Notchaway Creek in Baker County in 1839. The minutes of the Bethel Baptist Association of 1839 lists Notchaway among the churches asking for membership. Subsequently a history of the Bowen Baptist Association indicates Notchaway became active in 1863 listing first families as Mathis, McMurria, Moore, Bodiford and Jones. Notchaway joined the Bowen Baptist Association in 1872. In November of 1895, a decision was made to move the church building from its location on Notchaway Creek to ‘Old Providence’ while a new sanctuary was being constructed. The new building was completed in 1896. Notchaway is a Missionary Baptist Church and the early minutes show an active interest in missions with collections being taken for both foreign and domestic missions. Notchaway is still going strong and has been actively serving the community since 1863. They have services every Sunday at 11 am and Baptisms are performed in the Flint River that is close by. Notchaway was added to the National Register of Historic Places in 2001. By the way, the water pump in the foreground of the photo still works. 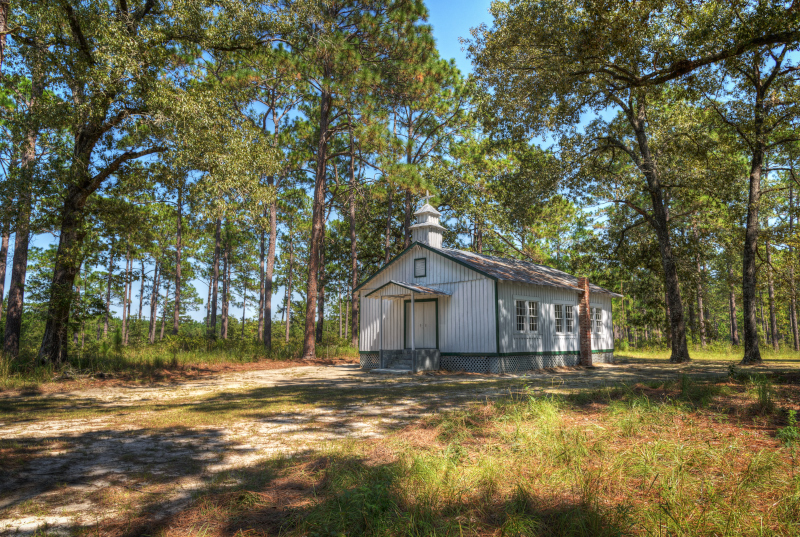 The history of John the Baptist is very scant, which is not unusual for a rural African American congregation formed not long after the Civil War. Over time, many of these old rural sanctuaries fell into disrepair and slowly disappeared as a result of declining membership and abandonment. We do not know when the church was organized or when it was built, but the fact that it even exists today, is because it is located on Ichauway Plantation in Baker County.

Ichauway was the quail hunting preserve of Mr. Robert Woodruff, the Chairman and leader of the Coca Cola company from 1926 to 1954. In 1954, he stepped down as president but remained on the board of directors until 1984. The plantation was assembled by purchases from several local landowners in 1929. It consisted of approximately 30,000 acres and was used for entertaining the many guests and friends of the Coca Cola company from all over the world. President Dwight Eisenhower, who loved quail hunting, was a frequent visitor to Ichauway. Mr. Woodruff died in 1985, leaving the plantation to his Robert W. Woodruff Foundation. The foundation trustees, after much study, then decided to transform Ichauway into an ecological research center with a focus on the ecology, restoration and management of the longleaf pine ecosystem and water resources. It is now known as the Joseph Jones Ecological Research Center, named for Joseph W. Jones, a longtime associate of Mr. Woodruff and Chairman Emeritus of the Woodruff Foundation.

The old church is in a remote location but close to the little town of Hoggards Mill on the banks of Ichauway-Notchaway Creek. The town was established in the 1870s and, in 1880, had a population of 150 according to the federal census. The name Hoggards Mill is rooted in the fact that several mills were located along the Creek…..including a saw mill, a cotton gin, and two grist mills. According to the local history “The primary exports from the town were lumber and cotton, like most other settlements in the area. The area first had a Methodist and Baptist church, which also served as public schools. In the 1800s Hoggards Mill had three general stores, three mills, two physicians, and two lawyers.” Today, there is not much left of Hoggards Mill except the old general store which is open to the public. For more background on Hoggard’s Mill and Ichauway, click here.

John the Baptist was a typical rural African American church established in this part of Georgia at the turn of the century. A look at Baker County historical demographics will put this into proper perspective. In the first half of the 19th century, this part of Georgia saw a dramatic increase in both cotton production and the use of slaves to achieve it. The total population of Baker County was 1,252 in 1830 and 78% of this total was white. In 1860 the total population had increased to 4,990 but the white population was only 30%. By 1880, the ratio of blacks to whites was approximately three to one, as south Georgia shifted from a plantation system using slave labor, to a patchwork of farms organized to support small landowners and emancipated African Americans as sharecroppers.

It was a hard life and the black community took refuge and spiritual comfort in their own churches that rapidly emerged to serve those congregants living nearby. John the Baptist was one of these. We can rest assured that many souls were saved, many hymns were sung and much praise to the Lord was given in this simple structure. We owe the stewards of the Ichauway legacy a debt of gratitude for their respect for this important aspect of our culture and heritage. The church is located on private property with selected access, but her continued preservation and maintenance seems assured. For more information on the work being done by the Joseph W. Jones Ecological Research Center, click here. 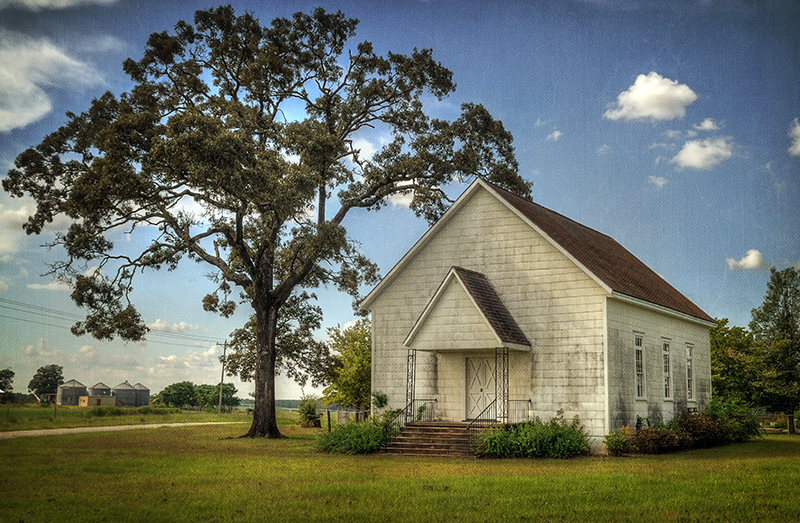 The original church was in 1850 of hand hewn logs and was located approximately at the junction of county roads S119 and 81. The church served the entire community, whites and their black slaves, with both groups included in the membership. In 1861 the Civil War descended upon the land with all its attendant hardships. The church sometimes served as shelter and campground for the soldiers, particularly during the winter months. After the war the lives of the people changed drastically and the community adjusted as well as they could. The old church still served as a place of worship and community but finally fell into disuse in the 1880’s.

The existing church was then erected on the site of the present cemetery which had been established in 1870. The site was chosen because it was the highest ground in the territory suitable for burials without groundwater problems. In the late 1800’s the cemetery property was under the ownership of Clarence D. Brown who donated an acres to “G.W. Riley, J.W. Calhoun and others, their heirs and assigns” and provided the cemetery henceforth would be known as the Calhoun Cemetery. Shortly thereafter plans were made for a new church which was completed in the latter part of 1900. The deed for the new church specified that the property would be used for a church but the timber would remain the property of the owner, Clarence Brown, and that the name of the church would be forever that selected by Mr. Brown i.e. Christ Church. Mr. Brown was obviously a shrewd negotiator.