Elko, Georgia is a small town made up of charm, character and a close-knit community. In 1891, three years after Elko was established, the town “birthed” its first church, Elko Baptist Church. The church began with nine members, five males and four females. They were a small bunch, but they nurtured the church through the first few years of what was only the beginning of a flourishing history. For over 100 years, the growing congregation met and worshipped the Lord within the walls of this small space. It wasn’t until 2010, when Pastor Harold Lee Moore passed away at 91 years old, that the happenings of Elko Baptist fizzled away. Without a pastor, the members of the church stopped attending services, which caused Elko Baptist to go out of commission. 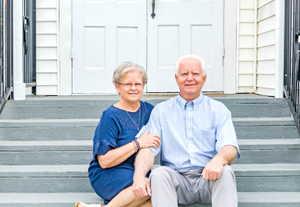 Four years later, Pastor Wayne Holcomb and his wife, Debbie, experienced a transition in their ministry. They had been pastoring another church for almost 10 years when they felt led to step out of their current role. In the same weekend that they announced their transition to their congregation, the opportunity to visit Elko Baptist arose. Wayne and Debbie were unaware of the extensive history and current state of Elko Baptist before they saw it, but they were interested in its potential from the start. Wayne tells me, “It took some doings to find one of the younger descendants of some of the founders of the church.” When they located her, they set up an appointment to view the church. Wayne and Debbie describe the condition of the church after four years of neglect, and it is quite shocking. The steeple, full of wasps, was unsealed with cracks between the boards allowing the wasps free access into the church. The blinds, originally installed in the 1800s, were rusty and barely concealed the 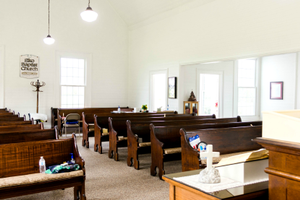 window panes that were falling out behind them. The carpet and pew cushions were outdated and caked with dust, desperately needing to be replaced. Examining the rest of the church, Wayne and Debbie saw the full condition of the building and knew that restoring the church would be a big project.
Not only was the church in an unkempt condition, Wayne and Debbie tell me it had the physical appearance of abandonment. Debbie says, “The last time the four or five people met here, they just left and never came back. That Bible up there was opened up on the pulpit and there was money in the collection plate.” Wayne says of its previous pastor, “He was preaching here as long as he could. When we came in here to look at the church for the first time, that stool was right there and his cushion was still in it.” It was as if the church’s operation 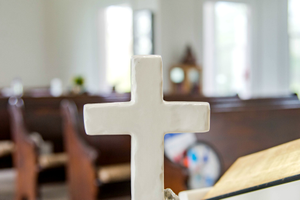 ceased to exist in a single unknowing moment. Despite all this, the Holcomb’s trusted that the Lord would bless whoever set out to restore His church.
Having visited Elko Baptist and feeling led by the incredible timing of the Lord, Wayne and Debbie stepped up to bring the church back to life. Debbie tells me, “The girl that met us here that day told us we could move in and pick up where they left off, but she also said, ‘I just ask that you don’t change the structure of the church –the look on the outside. Don’t tear down walls and stuff like that.’” Honoring her request, they set out to improve the church’s condition without shedding it of its long-standing character. Wayne, a carpenter and general contractor by trade, was more than equipped to head up this project. The process of renovating the church was one of continued assurance that Wayne and Debbie were doing the Lord’s work. A current member of the restored church stepped up during renovations and contributed by replacing the old windows with new vinyl windows. Wayne speaks of him, along with everyone who volunteered their time, money and resources to seeing the project through, with thankfulness 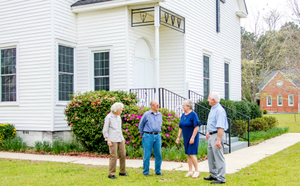 and gratitude. In addition to fixing the steeple, repainting, and replacing things like the windows, carpet and pew cushions, they upgraded the extension on the back of the church. They renovated the kitchen, installed new cabinets and floors, and redid the bathroom. They also bought new tables and chairs. With the help of members, donators and hired help, the church was restored back to life. If you didn’t know its history, you would never guess what the church had endured.
In addition to the renewed building, the Lord blessed Wayne with a whole new congregation. He speaks highly of the people the Lord brought to Elko Baptist referring to them as, “Some of the best people in the world.” Wayne says, “I prayed when we came over here, send me people with a heart to worship and that want to be part of something that can make a difference in people’s lives.” The Lord did just that. Wayne feels blessed to have the congregation he has and is increasingly thankful to have been called to this church. 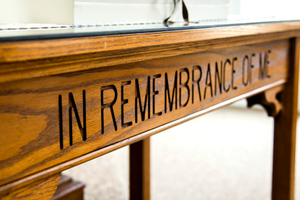 Musically inclined members of the church play instruments such as the electric guitar, mandolin and banjo during the services. Wayne adds, “My lifelong association with musicians gave me an inside track on some of the bands that come here several times a year and perform for us live.” One member that plays the guitar during services is Jeff Walker. At 92 years old, he is full of life, energy, and has a heart for people. Jeff lights up the room with his signature dance that he calls, The Elko Shuffle. It is genuine folks like Jeff that occupy the space of Elko Baptist and welcome newcomers with outstretched arms. 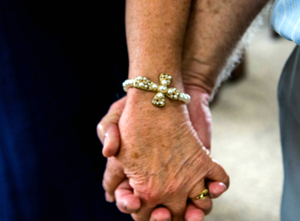 Wayne and Debbie took a leap of faith when they took on this church, and the Lord could not have chosen two better people for such a task. To this day, Wayne is still in awe of the perfect timing of when this opportunity arose. He compares it to a spiritual aligning of events and circumstances like one would find in a Guideposts magazine. “For lack of a better description of it, it was one of those times in the church’s life and in our lives…God just dropped this church in our lap. No strings attached.” Wayne also says, “God wanted this church to come back to life. Since He brought me here, five and a half years ago, He put his stamp and his blessing on this unlike anything else in my life. It has been a dream, really.” The Holcomb’s are living proof of what the Lord can do when you walk in faith towards your calling, and they will continue nurturing this congregation so long as the Lord sees fit.

Your tax-deductible donation to Historic Rural Churches will help keep history alive through digital and physical preservation efforts for Georgia’s rural churches, their history and the communities that support them.